The Scientific Link Between Sleep and Alzheimer’s 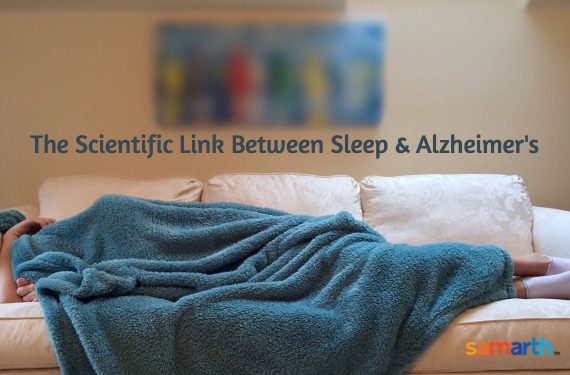 All of us are aware of the dangers of Alzheimer’s disease and the extensive research that is going on to understand it better.  An insightful article about the link between sleep and this disease was recently published in the ScienceNews Magazine. This article by Ms Laura Beil talks about interesting facts that research has thrown up about the link between Alzheimer’s and sleep.

Neuroscientist Barbara Bendlin, studies the brain, at the University of Wisconsin–Madison, home to the Wisconsin Registry for Alzheimer’s Prevention. This is a study, started in 2001, where more than 1,500 people between the ages 40 to 65 have signed up to participate in  Alzheimer’s research, even though they did not have the disease. However, more than 70% of these volunteers had a family history of the disease.

These people have been regularly tested for various aspects under study, including the presence of amyloid-beta. This protein fragment can clump into sticky plaques in the brain, that is an indication of the Alzheimer’s, which is the most common form of dementia. They also answer various questionnaires about their lives. It is the sleep-related answers in there that caused the research team to report in 2015 in Neurobiology of Aging, that the sleep-deprived among these have more A-beta plaques visible on their brain imaging. Another subgroup study in this topic by Bendlin’s team also reported last year in Neurology, that poor sleep was associated with biological markers of Alzheimer’s in the spinal fluid.

Another study has reported that the brain actually runs a clean cycle during sleep to remove metabolic debris, mainly the A-beta, thus preventing the disease or its progress. However, not much is known still, and an analysis of these studies just helped to conclude in 2017 that those who slept poorly had a 68 per cent higher risk of getting such disorders as compared to those who rested well.

Why is sleep important?

Neurologist David Holtzman, of Washington University School of Medicine in St. Louis, conducted a landmark study on mice to understand this. He thinks that Alzheimer’s is a garbage collection problem wherein, the nerve cells leave behind the garbage, especially A-beta as part of their work. While the body usually clears this garbage, at times, especially when there is a lack of sleep, this A-beta starts to get collected in the brain like how litter gets collected in the gutter. Too much of this will then get accumulated into plaques, resulting in Alzheimer’s. He and his team noted that the A-beta levels were clearly linked to sleep, irrespective of the time of the day of sleep.

Interestingly, in another study, by researchers at the Washington University School of Medicine, they managed to reverse the cognitive problems of the disease in fruit flies, genetically programmed to mimic the neurological damage of Alzheimer’s disease, just by forcing them to sleep.

Another study conducted by a team of Swedish and British researchers measured the levels of A-beta in cerebrospinal fluid and markers of neuron injury in 13 volunteers, irrespective of whether they were sleep deprived and not. Initial measurements were done after a sound sleep, and then after the sleep was cut back by four hours of sleep a night, for five nights. While they expected changes in the brain, astonishingly, they did not see it. However, all participants were young and healthy within the age range of 20 to 30. Hence, it could be concluded that perhaps the brain coped better with sleep deprivation, when young.

Bendling and her colleagues are now studying people with sleep apnea, who cannot sleep well, since they stop breathing during the night, affecting the sleep. This condition is treated with a machine called CPAP (Continuous positive airway pressure). One such study in 2015 suggests that the use of CPAP might help. The researchers at the New York University School of Medicine found that people with sleep apnea or other such sleep disorders showed signs of the disease, at younger ages than others. However, with people used CPAP, the same was found to be delayed. So, according to Brendlin, all these studies indicate that there is a possibility to intervene in the disease. And for now, as per her, sleeping well could be one prescription that may help counter the disease with not much side effects.

Are You Getting Enough Sleep? It’s a good time to check!

Few Retirement Life Hacks To Get More Per Rupee

Adult Diapers – Not So Taboo Anymore

How to Counter Insomnia

Exercise Your Brain Without Moving a Muscle

Yes, You Can Exercise Your Brain Too!

Tips To Push Away The Loneliness

Adult Diapers – Not So Taboo Anymore