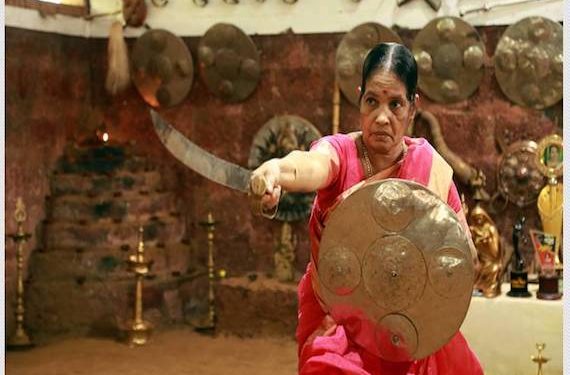 There are scores of inspirational people around us. We just need to look round and get inspired. One such truly inspirational person is Meenakshi Gurukkal.  At 74, she is possibly the oldest woman exponent of Kalaripayattu, an ancient martial art from Kerala.

it is indeed a blessed sight to see Meenakshi Gurukkal crouched low, sword poised, her eyes unblinking as she faces her opponent in the mud-paved ‘kalari’ or arena. Sounds like a scene from a historical film? To those who have experienced it, it sure feels like a slice of history.

In her school, the walls display weapons – fist daggers, shields, spears, thick wooden rods, tusk-shaped ‘ottas’ and ‘urumis’ – long flexible blades used in combat.  Among them is a shield, polished, but old with use – one that Meenakshi herself had trained with as a young girl. She started learning Kalaripayattu at the age of six when her father took her and her sister to a local kalari. The fact that there were only a handful of girls in the class did not bother her father. He was determined they learn Kalaripayattu. Since that day, she has been practicing Kalaripayattu for no less than sixty-eight years – training and teaching. Meenakshi turned out to be naturally gifted, and her father encouraged her to continue training even past puberty when girls normally stopped.

It was then that she met and married Raghavan Master, a school teacher with a passion for Kalaripayattu. Shunned from joining a local kalari because he was from a backward community, Raghavan Master had built his own Kalaripayattu training school in defiance. “Kadathanadan Kalari Sangam” was set up in 1949 –  a place where anyone and everyone who had a passion for the martial art could join, learn and excel. His goal was to make Kalaripayattu accessible to everyone. Today the goal has been realised.

Around 150 students learn Kalaripayattu in her school, in a tiny hamlet near Calicut, Kerala. More than a third of the students are girls, aged between six and twenty-six. Meenakshi’s school welcomes children from all walks of life. Gender and community are totally irrelevant. What matters is age. The earlier they start, the more proficient they are.

The school runs on a ‘no fees’ principle. At the end of each year, students give her whatever Guru Dakshina they chose to. Today, some of her students are now Gurukkals or masters themselves. From June to September every year, classes are held thrice a day teaching the Northern style of Kalaripayattu, including “uzhichil” or massages for aches and pains. Techniques have been passed down through generations, written in a palm ‘booklet’, grey and delicate with age. When school term is over, Meenakshi takes part in performances. On an average, she performs in 60 shows a year.

Watching her block, hold and fight, we know she is determined to prove that age is just a number!

Have you seen another inspiring woman – a Bharatnatyam dancer at age 92!

Stay Alert From Dengue and Chikungunya

Why You Should Include Mushrooms In Your Diet

The Walking Habit and Tips for Summer Heat

Stay Alert From Dengue and Chikungunya