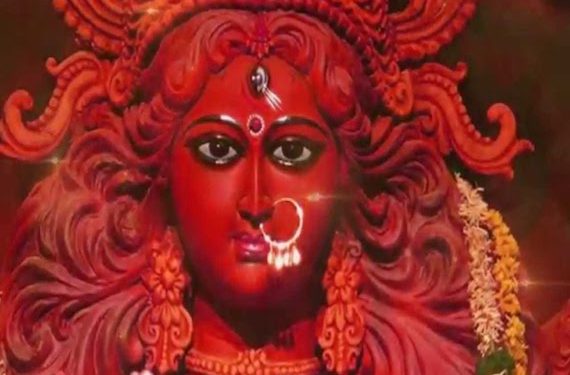 A song that graces through everyone’s homes for nine days every year. This is one of the most famous stotras composed by Sri Adi Shankaracharya. Adi Shankara, also known as Adi Sankaracharya (the first Shankara in his lineage), and Sankara Bhagavatpadacarya (the teacher at the feet of God), 788 – 820 was the first philosopher in the tradition of Advaita Vedanta. His teachings are based on the unity of the soul and God, wherein the latter is viewed as being simultaneously personal and attributeless. The song is said to be created praising all forms of the Goddess, celebrating her greatness and specifying through the entire song, in the process soothing her anger that was triggered when she slayed Mahishasura.

Why do we celebrate Navratri?

Navratri, culminating with Dussehra, is a cultural festival of great importance and significance for all. It is a festival that is all about the Goddess. In Karnataka, Dussehra is about Chamundi, in Bengal, it is about Durga. Like this, it is about various goddesses in different places, but essentially it is a celebration of the feminine goddess or the feminine divinity. This festival is very colourful, has a lot of traditions and is much awaited by everyone.

Dussehra celebrates the Hindu god Rama’s victory over the demon king Ravana and the triumph of good over evil. Also, according to Hindu mythology, Mahishasura was a combination of both an Asura and a mahisha (“water buffalo”) with a trident. He intended to annihilate all the Devas since they were the arch-enemies of Asuras. The legend of Mahishasura is important in Hindu mythology since the goddess Durga was incarnated to slay him. Durga led a battle against Mahishasura and killed him, thus fulfilling the prophecy that he would meet his death at the hands of a woman.

Legend also says that Mysuru gets its name from Goddess Durga, Mahishasura Mardini. It is believed that the people of this region were saved from the Buffalo Demon Mahishasura who had come and occupied the land. This was when people prayed to Goddess Durga for help, and she descended during a sacred period which is now called Navratri or Dushera. Thus, the Nine days battle took place on the Chamundi Hills where he was slain at last.[3] Hence, the Dusshera festival is the biggest festival, and this is also called Nada Habba which means, the State Festival in Kannada and is famously known as Mysore Dasara. In Kerala, there exists a parallel mythology according to which, Mahishasura had a sister by the name of Mahishi. After the death of Mahishasura, Mahishi continued the war against Devas.

How do we celebrate?

Navratri symbolises the triumph of good over evil. During these nine days, Durga, Lakshmi, and Saraswati are worshipped as three different manifestations of Shakti, or cosmic energy. The most significant part of Navratri is the setting up an odd number of steps and the placement of different idols of Gods on them. This setup is called a “Golu.” Generally, when people come to a person’s house to see their Golu, they are given prasad (the offering given to God that day), kumkum and Tambula. On the first three days, the Mother is invoked as the powerful force called Durga in order to destroy all our impurities, vices and defects. The next three days, the Mother is adored as a giver of spiritual wealth, Lakshmi, who is considered to have the power of bestowing on her devotees the inexhaustible wealth. The final set of three days is spent in worshipping the mother as the goddess of wisdom, Saraswati. In order have all-round success in life, we need the blessings of all three aspects of the divine mother; hence, the worship for nine nights. During Navratri, some devotees of Durga observe a fast and prayers are offered for the protection of health and property.  A period of introspection and purification, Navratri is traditionally an auspicious time for starting new ventures.

Listen to this shloka here: https://www.youtube.com/watch?v=442ewPgXHQ0