Evergreen Hindi Classics You Can See Again And Again ! 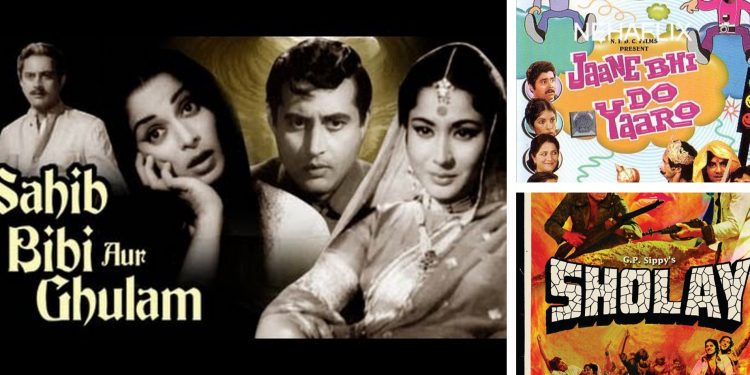 It is no less than a Herculean task to shortlist only a few Hindi movies when an entire life can be spent by watching the movies which have brilliantly reflected each era with so much conviction.

However, take a look at those movies which have stood the test of time and still charming the audiences:

1. Mughal- E-Azam: The film starring Dilip Kumar, Prithvi Raj Kapoor and gorgeous Madhubala in the lead roles portrayed an eternal love of Mughal prince Salim and courtesan Anarkali. Directed by K Asif, an enormous cast, opulent sets, intricately designed costumes and extravagantly staged battle scenes made the film the most expensive ever produced in India at the time. Prithviraj Kapoor, who played the legendary role of King Akbar, immortalized the character on celluloid. A poll conducted in 2013 by British Asian weekly newspaper rated it as the greatest Bollywood film of all time.

2. Mother India: While nature shows no mercy, the village belle Radha weathers all the tragedies and adversities without compromising her honor. A defining film in the history of Bollywood, director Mehboob Khan’s iconic Mother India set the pattern for the Hindi cinema which followed it for many years to come. It was India’s first submission for the Academy Award for Best Foreign Language Film in 1958, where it got the nomination and lost the award by just one vote. starring Nargis, Sunil Dutt, Rajendra Kumar, and Raaj Kumar, Mother India still ranks among the all-time Indian box office hits.

3 Guide: Based on the R.K. Narayan novel of the same name and the soulful stunning soundtrack by S. D.Burman, Guide explores the journey of transformation of a corrupt man into idolized soul. The movie proved memorable for its award-winning performances by the lead actors Dev Anand, Waheeda Rehman and flawless screenplay by Vijay Anand.

4 Saheb Bibi Aur Ghulam: Spiralling against her will with the collapse of Calcutta’s landed aristocracy, Meena Kumari’s portrayal of the tormented wife is forever considered among the most magnificent on-screen performances of Bollywood history. Desperate to save her marriage, the younger daughter-in-law of a wealthy family sacrifices her moral boundaries to win over her alcoholic husband.

5. Sholay: One of the most successful movies in the history of Indian cinema, Sholay broke every box-office. Dharmendra, Amitabh Bachchan, Sanjeev Kumar, Hema Malini, Jaya Bhaduri and Amjad Khan in the lead, the impact of the movie was such that every single character in the movie is remembered till date. And for the first time in the history of Indian cinema, people loved the legendary villain Gabbar Singh played by debutante Amjad Khan.

6. Jane Bhi Do Yaro: Like Sholay’s dialogues, one has learned JBDY’s scenes and gags by heart – be it the cake scene (‘thoda khao, thoda phenko’), the play on ‘gutter’, or the Mahabharat-Salim Anarkali stage mash up.

The list is never ending. These movies will make us laugh and cry but we will always cherish them for their grandeur. If you too have your favorites to add to the list or want to share about your favorite artist, click  www.samarth.community/forum/lifestyle

How is Origami Beneficial for Seniors?

Having A Social Life After You Retire

Coping With the Death of a Spouse

Living Life in the Senior Years

How To Get A Senior Citizen Passport